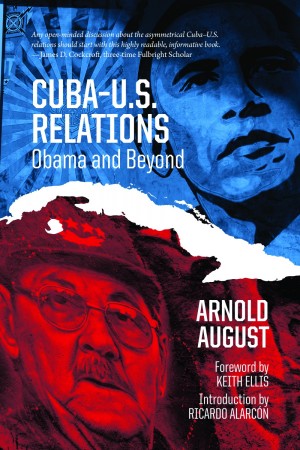 Against the background of the history of Cuba–U.S. interconnectedness and in light of Obama’s ini­tiative and Trump’s election, Arnold August deals with the relationship between the two countries, delving into past and current U.S. aggression against Cuba’s artistic field, ideology and politics. Based on twenty years of fieldwork in and investigation of Cuba, this book provides a unique perspective on the island’s diverse approaches to the cultural war being waged by the U.S. and illustrates the heterogeneous nature of Cuban society.

An expert on Cuba, Arnold August offers a revealing view of the conflict between Washington and Havana and the foreign policy of the United States vis-à-vis the island.

Any open-minded discussion about the obviously asymmetrical relations between Cuba and the United States should start with this highly readable informative book. Based on deep research, including use of historical U.S. government documents and extensive field work inside Cuba, it should be acquired by libraries, students, and people about to travel to Cuba, journalists, government employees, and academics working in international affairs.

This book could not have been more timely. With Fidel Castro’s death focusing outside attention on Cuba’s future and with Trump’s election throwing U.S.–Cuban “normalization” into question, Arnold August contests the common assumptions and public rhetoric about Cuban politics and about that “normalization.”

August provides the reader with a bridge across time and nations to understand the changes that have led to the “normalization” of Cuba–U.S. relations and serves as a guide to the Trump future.

For those who want a fresh and reasoned perspective on Cuba and U.S. relations — and with it a perspective very different from that which we get from the mainstream Western media — this book is a must-read.

August’s deft analysis, firmly grounded in a prolonged exposure to Cuban history and debates while mapping out the possible future developments, makes for an enlightening book.

Arnold August’s new book on Cuba dispels the propaganda and myths perpetuated by both the U.S. corporate media and the Obama administration and provides valuable insights into what we might expect from a Trump government in the post-Fidel era.

A timely and valuable source of clear analysis of Cuba–U.S. relations at the dawn of the Trump era, and an indispensable tome for activists and others interested in furthering normalized relations between Cuba and the U.S. and asserting Cuba’s right to self-determination and sovereignty over all its territory.

Here at last for English-speaking readers is a full overview of U.S. relations with Cuba from Cuban points of view. The book is essential background for understanding whatever President Trump has in store.