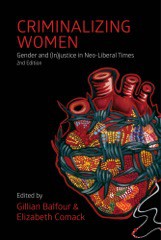 Criminalizing women has become all too frequent in these neo-liberal times. Meanwhile, poverty, racism, and misogyny continue to frame criminalized women’s lives. Criminalizing Women introduces readers to the key issues addressed by feminists engaged in criminology research over the past four decades. Chapters explore how narratives that construct women as errant females, prostitutes, street gang associates and symbols of moral corruption mask the connections between women’s restricted choices and the conditions of their lives. The book shows how women have been surveilled, disciplined, managed, corrected, and punished, and it considers the feminist strategies that have been used to address the impact of imprisonment and to draw attention to the systemic abuses against poor and racialized women.

In addition to updating material in the introductions and substantive chapters, this second edition includes new contributions that consider the media representations of missing and murdered women in Vancouver’s Downtown Eastside, the gendered impact of video surveillance technologies (CCTV), the role of therapeutic interventions in the death of Ashley Smith, the progressive potential of the Inside/Out Prison Exchange Program, and the use of music and video as decolonizing strategies.