The Law and Order Agenda in Canada 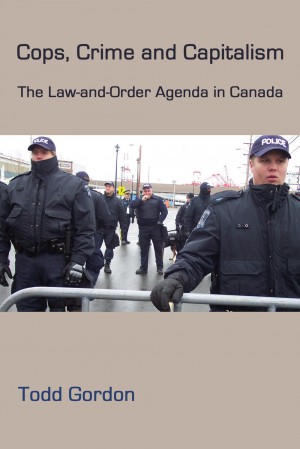 Framed within a Marxist class analysis that highlights the way in which state power and capitalist social relations are racialized and gendered, Gordon’s study locates law and order policing as a central moment of capitalist state power. He argues that, as with policing historically, crime-fighting is not the principal aim of contemporary law and order policing–rather the aim is the production of a new social order based on the severely diminished expectations of working people. Crime fighting matters only insofar as it helps in this process. Law and order policing is not really a fight against rampant and escalating crime; rather it is aimed at forcefully limiting any possibilities the able-bodied poor may try to pursue to avoid the worst forms of wage labour.

Gordon says that to properly understand the law and order agenda, we must situate it within the broader context of the political and economic changes associated with neoliberalism. Law and order policing is not an isolated state policy endeavour or policing practice. It is a central feature of a state power that, far from retreating with the demise of the Keynsian Welfare State, is actively facilitating the establishment of an new–neoliberal–capitalist order premised on the restructuring of social relations. Law and order policing is very much about the role of an aggressive state and its relationship to the class struggle lying at the heart of contemporary Canadian society.