Big Business, Workers and Unions in the Transformation of North America 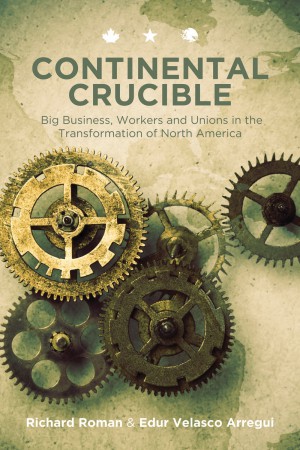 The crucible of North American neo-liberal transformation is heating up, but its outcome is far from clear. Continental Crucible examines the clash between the corporate offensive and the forces of resistance from both a pan-continental and a class struggle perspective. This book also illustrates the ways in which the capitalist classes in Canada, Mexico and the United States used free trade agreements to consolidate their agendas and organize themselves continentally.

The failure of traditional labour responses to stop the continental offensive being waged by big business has led workers and unions to explore new strategies of struggle and organization, pointing to the beginnings of a continental labour movement across North America. The battle for the future of North America has begun.

“This tremendously insightful book not only offers a rare analysis of the intertwining political economies of all three countries that make up North America, but does so in a manner that tellingly reveals the specific nature of the American empire, and how it is affected by class struggles within each state. No other study has shown so clearly that, far from the neoliberal integration of the continent being imposed from the outside by the United States, it was the Canadian and Mexican states which took the crucial initiatives, above all as a means of shifting the domestic balance of class forces in favour of their own capitalist classes and against their working classes. A must read for critical thinkers and activists in all three countries.”

“This insightful, revealing, and passionate book is a must read for workers and union activists all over the world in their efforts to develop strategies to overcome neoliberalism. The creation of a single North American and global labor market by NAFTA and neoliberal globalization has created both the bases and the necessity for workers and unions to move beyond nationalism and chauvinism.”