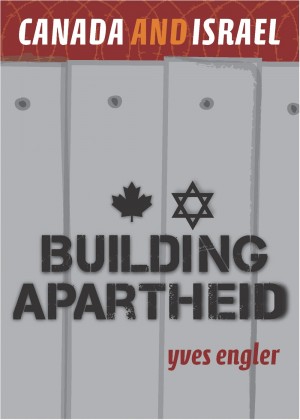 This book is the first critical primer about Canada’s ties to Israel. It is a devastating account of Canadian complicity in 20th and 21st century colonialism, dispossession and war crimes. The book documents the history of Canadian Christian Zionism, Lester Pearson’s important role in the United Nations negotiations to create a Jewish state on Palestinian land, the millions of dollars in tax-deductable donations used to expand Israeli settlements in the West Bank and the Canadian Security Intelligence Service ties to Israel’s Institute for Intelligence and Special Operations (Mossad).

“Yves Engler’s meticulously researched volume refutes, for anyone who still believes it, the myth that Canada is or ever has been an honest broker in the Middle East. Reading Engler’s work leaves one with the inescapable and sad conclusion that the essence of Canadian policy has always been support for the establishment and continued dominance of an expansionist Zionist state in the territories that now comprise Israel, Gaza, and the West Bank. As a former Zionist youth leader, I thank Engler for setting the record straight and can only lament our country’s historical and ongoing contribution to the tragedy enveloping the long-suffering peoples of the Promised Land, Arab and Jewish.”

— Gabor Maté, Physician and author of In the Realm of Hungry Ghosts: Close Encounters With Addiction

“The only book that need be written on Canada’s policies towards Israel… The most carefully documented book relating to the Israel/Palestine conflict I have ever read.”

— Michael Neumann, author of The Case Against Israel, CounterPunch.org

“For a country that prides itself on its commitment to goodness (and its opposition to imperialism), the book’s challenge is potentially transformative.”

“Concise and informative history of Canada’s foreign policy towards Israel … an important and timely book.”