An Illustrated History of Drug Prohibition in Canada 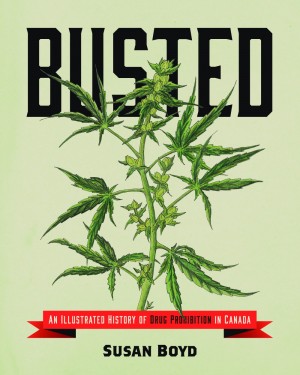 Long-listed for the George Ryga Award.

Canada’s drug laws are constantly changing. But what does Canada’s history of drug prohibition say about its future?

Busted is an illustrated history of Canadian drug prohibition and resistance to that prohibition. Reproducing over 170 archival and contemporary drawings, paintings, photographs, film stills and official documents from the 1700s to the present, Susan Boyd shows how Canada’s drug prohibition policies evolved and were shaped by white supremacy, colonization, race, class and gender discrimination. This history demonstrates that prohibition and criminalization produces harm rather than benefits, including the arrest of thousands of Canadians each year for cannabis-related offences, and the current drug overdose crisis. .

Visually engaging and approachably written, Busted is a timely examination of Canada’s history of drug control and movements against that control. Susan Boyd argues that in order to chart the future, it is worthwhile for us as Canadians to know our history of prohibition and how it continues to intersects with colonization and race, class, and gender injustice.

“A thoughtful and creative look at the history of drug prohibition in Canada. Preeminent drug policy scholar, Susan Boyd, takes the reader three centuries back in time, revealing how far we’ve come in an effort to show us how far we have yet to go. Busted comes at a pivotal point in Canadian drug policy and should be heeded by all.”

“Busted is a book that should be read by all those who wish to understand our convoluted drug policy. Combining historic and modern graphics with scientific facts, the book allows readers to grasp the insanity of drug laws.”

“Busted is a visually rich and historically intriguing analysis of the twists and turns in the development of Canada’s drug policy…An important contribution to the historical record of how we got to where we are today.”