The Threat of Transgenic Crops to Farmers in the South 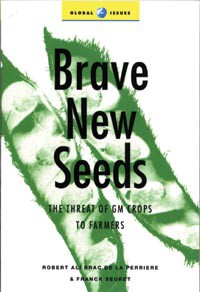 Consumers have taken the lead in rejecting the biotech industry’s determination to foist GMOs on an unsuspecting and unconsulted public. This book gives a voice for the first time to farmers. They are the people being pressured by half a dozen giant corporations to grow these genetically engineered crops. What are the possible downsides for them, particularly for those hundreds of millions of farmers living in the developing countries? On their environment? On their health? On their independence? On their tenuous hold in the marketplace?

This important book comes out of a dialogue between farmers’ representatives and scientists and others knowledgeable about the issue. The result is a lucid explanation of what is happening, what is at stake and a clear statement of principles and urgently needed measures which should guide governments and communities in bringing this profit-motivated deployment of scientific power under democratic control.