Homeland Security and the Search for North America 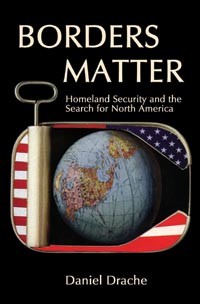 The great North American border has always been a blend of the porous and the “impermeable.” If the border, in all its aspects, is working well, then Canadian sovereignty will be effective and focused. When the fundamentals are neglected, sovereignty becomes threatened, and economic integration becomes the focus of debate.

Borders Matter examines the importance of the US-Canada border against the background of the new pressures of increased security practices and the continuing need to have a sufficiently porous border for the purpose of trade. Canadians have never been very good at defining or defending their strategic self-interest. Instead, Canadians carefully negotiate between competing nationalisms, regionalisms and localisms and the reality of being a small economy dependent on and vulnerable to US pressures. Drache points to a need for a policy model and social theory that would grasp the complex, multi-dimensional and dramatic changes to the border and ultimately help to shape the political economy and future of this country.