Global Migration, Capitalism, and the Rise of Racist Nationalism 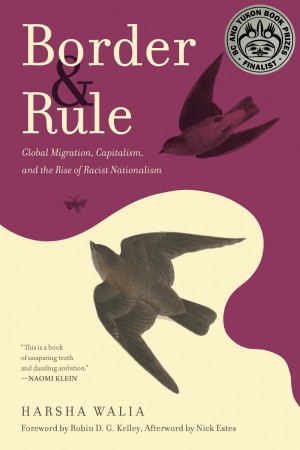 In Border and Rule, one of North America’s foremost thinkers and immigrant rights organizers delivers an unflinching examination of migration as a pillar of global governance and gendered racial class formation.

Harsha Walia disrupts easy explanations for the migrant and refugee crises, instead showing them to be the inevitable outcomes of conquest, capitalist globalization, and climate change generating mass dispossession worldwide. Border and Rule explores a number of seemingly disparate global geographies with shared logics of border rule that displace, immobilize, criminalize, exploit, and expel migrants and refugees. With her keen ability to connect the dots, Walia demonstrates how borders divide the international working class and consolidate imperial, capitalist, ruling-class, and racist nationalist rule. Ambitious in scope and internationalist in orientation, Border and Rule breaks through American exceptionalism and liberal responses to the migration crisis and cogently maps the lucrative connections between state violence, capitalism, and right-wing nationalism around the world.

Illuminating the brutal mechanics of state formation, Walia exposes US border policy as a product of violent territorial expansion, settler-colonialism, enslavement, and gendered racial exclusion. Further, she compellingly details how Fortress Europe and White Australia are using immigration diplomacy and externalized borders to maintain a colonial present, how temporary labor migration in the Arab Gulf states and Canada is central to citizenship regulation and labor control, and how far-right nationalism is escalating deadly violence in the United States, Israel, India, the Philippines, Brazil, and across Europe, while producing a disaster of statelessness for millions elsewhere.

A must-read in these difficult times of war, inequality, climate change, and global health crisis, Border and Rule is a clarion call for revolution. The book includes a foreword from renowned scholar Robin D. G. Kelley and an afterword from acclaimed activist-academic Nick Estes.

“In Walia’s expert hands, the planet’s sprawling borderlands are exposed as capitalism’s gaping wounds, filled with escalating terror and torment as whiteness ferociously seeks to defend its imagined boundaries. This is a book of unsparing truth and dazzling ambition, providing readers with desperately needed intellectual ammunition to confront the inherent violence of borders. An enormous contribution to our movements.”

— Naomi Klein, author of On Fire

“Harsha Walia’s Border and Rule forwards a clear and incisive analysis of the multiple crises facing migrants today amidst the rise of racist nationalisms globally. Her work highlights the entanglements between global capitalism, imperialism, and past and present dynamics of Indigenous genocide and anti-Black governance that are at the heart of the border regime. Border and Rule is a must-read, sure to become a classic, for those of us concerned with building a world premised on freedom of movement, against and beyond the logics of the nation-state.”

“I was haunted and agitated by this book which is part expose and part clarion call for radical action. Harsha Walia offers an unsparing analysis of the violences of forced migration, borders, imperialism and capitalism. The case studies presented in this book weave a quilt that provides us with needed knowledge to confront current problems that demand an organized collective response. The ideas in this book will linger long after you’ve put it down.”

“Read Harsha Walia and your understanding of the world will shift. This book is a comprehensive demolition of the borders that divide us and a deft takedown of the myth of the nation. Through a range of case studies, Walia reveals overarching patterns of exclusion and exploitation, crisscrossing the globe to make a brave, deeply learned, and utterly convincing call for radical solidarity. With cries of ‘build a wall’ ringing out and ethnonationalism gaining steam, Walia’s critical intervention couldn’t be better timed.”

— Astra Taylor, author of Democracy May Not Exist, but We’ll Miss It When It’s Gone

“In this exceptional book, Harsha Walia takes us on a stunning and terrifying tour of the Great Wall of Capitalism, the border killing zone where viral fascism feeds on the bodies of the poor and persecuted. Hell is already here.”

— Mike Davis, author of The Monster at Our Door and coauthor of No One Is Illegal

“Harsha Walia’s decades of visionary leadership in border abolition and migrant justice work, along with her relentless intellectual rigor, is apparent in this immensely important book, arriving right when we need it most. As governments lock down borders, mobilizations against policing reach new peaks, economic crisis worsens, and climate change accelerates, we desperately need this book if we hope to build a nuanced analysis of what we are facing and what kinds of transformation are necessary. Walia deftly exposes the inadequacy of liberal responses to the current crises, paving the way for a deeper understanding of the conditions we are facing and meaningful avenues for resistance. Walia’s deeply researched, crystal clear text creates a robust toolbox for comprehending the current crises and assessing resistance strategies. This book is invaluable right now, a must-read for anyone working to dismantle prisons and borders, end poverty and war.”

— Dean Spade, author of Mutual Aid: Building Solidarity During this Crisis (and the Next)

“We know that borders are violence. We know that violence numbs our collective imagination. We know that imagination is a muscle that must be exercised daily to prevent atrophy. This book is the workout. Border and Rule works us. With rigor, precision, and care, Harsha Walia pushes us beyond false solutions, rainbow imperialisms, and exclusionary projections. What a privilege to think with her, to build movement muscle for a world free of borders.”

“This indispensable, deeply researched, and beautifully written book is the first and most in-depth global analysis of borders and immigration, wars and displacement, imperialism and Western white nationalism. Always with her ear to the ground and paying close attention to the people whose lives are wrecked or lost, Walia demands action and offers real solutions.”

— Roxanne Dunbar-Ortiz, author of Not “A Nation of Immigrants” and An Indigenous Peoples’ History of the United States.

“Harsha Walia’s deeply thoughtful and well-written book makes creative connections that other writers have preferred to ignore. It offers a lucid, insightful survey of the most difficult political issues that we face.”

“Confused about how we got to this point? Harsha Walia explains clearly and concisely the multiple forces causing global poverty and displacement—and the resistance and organizing around the world. Walia provides a historical analysis of policies that have cut down people’s well-being and driven poverty, violence, terror, and mass migration, and highlights the myriad forms of resistance and organizing that are all too often invisibilized. An excellent explanation of borders, migration, and the exploitative systems that produce both.”

“Border and Rule provides a kaleidoscopic exposé, painstaking analysis, and damning indictment of the border regimes that are generating and fueling anti-migrant brutality and state violence on an international scale. Harsha Walia is relentless in drilling into, detailing, and cataloguing the array of processes, players, policies, and ideologies that uphold systems of border imperialism—while simultaneously mapping out for us an understanding of how we can disrupt and dismantle them.”

— Justin Akers Chacón, author of Radicals in the Barrio and coauthor of No One Is Illegal

“Every once in a while there comes a book that makes you never see the world the same way again. Harsha Walia’s Border and Rule is such a book. Incisive and rigorously researched, Walia lays bare the border apparatus like no other: its bloody history based on colonial dispossession, Indigenous genocides, anti-Black enslavement, and its contemporary function of maintaining—with militarized enforcement of divisions—a racialized global system of subjugation and exploitation rife with criminal inequalities and ecological catastrophes. Border and Rule is the most important reframing of borders and their enforcement apparatus that I have ever read. It demonstrates that the border is not a passive wall but an expansive omnipresent regime and that there is no “border crisis” but a displacement crisis. I will be turning to its pages again and again, not only for its analysis but also for its inspiration. Indeed, Walia strips borders of their pretense and justifications in such a powerful way, that after finishing the book it feels like we can tear down the walls, and all they represent, with our bare hands.”

“Building on the thesis of her seminal book Undoing Border Imperialism, Harsha Walia’s incisive voice in Border and Rule—equally rigorously theoretical and lovingly community-minded—refuses to allow our struggles and organizing to exist in vacuums. From anti-Black police murders and carcerality to the fortressing of borders across indigenous lands to the fabricated migrant crises to the exploitations of their labor, and to the racial nationalisms and legal structures that drive these violences, Walia’s latest book provides an international cartography of the crisis of global neoliberalism. It is a stunning and horrific elucidation of Ayesha Siddiqi’s line that ‘Every border implies the violence of its maintenance.’ But the narrative Walia deftly weaves is the polar opposite of alarmist political nihilism: it is a clarion call for our solidarities to always transcend the physical and ideological boundaries drawn by empire. This is not simply a book about violence, it is also a book about the potential for care and for freedom.”

“Timely and topical, Border and Rule will be of interest to scholars, activists, and general readers. Walia connects variants of ethnonationalism across borders and illustrates how a world order predicated on aggression and displacement harms the most vulnerable among us, a category that includes a significant portion of the global population. Her analysis presents clear and compelling evidence that our current trajectory is unsustainable and offers cogent solutions trained on justice for the victims of endless war and colonial accumulation.”

“As communities and social movements scramble to respond to the threat of a globalized far-right against the apocalyptic backdrop of a global pandemic and impending ecological disaster, Harsha Walia’s Border and Rule reminds us of how we got here. With clinical precision, Walia unravels the genealogies and histories of border militarization, incarceration, and imperialism, laying bare the webs of domination and exploitation that threaten the poor and vulnerable everywhere, from those incarcerated in Australia’s offshore immigration camps to the victims of drone warfare in Yemen. As we struggle with the cruel symptoms of a global disease—incarceration, exploitation, occupation, colonialism, environmental collapse—Walia picks this web apart, exposing the ways in which these crises interlock and overlap. It is a stark but necessary blueprint to understand. This book is also full of hope. It bears witness to the struggles of those who have survived and continue to resist in spite of merciless repression—the Indigenous, the enslaved, the exploited, the dispossessed, and the undocumented. It is an urgent and revolutionary call to action that invites us to revisit the problem so that we may dream and fight harder for the world we want.”

— Aamer Rahman, comedian with Fear of a Brown Planet