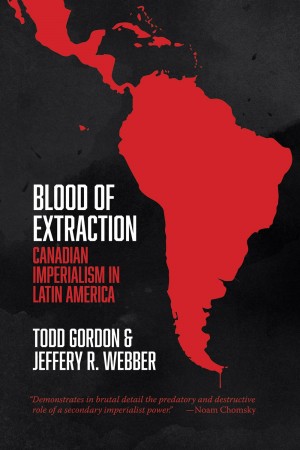 Rooted in thousands of pages of Access to Information documents and dozens of interviews carried out throughout Latin America, Blood of Extraction examines the increasing presence of Canadian mining companies in Latin America and the environmental and human rights abuses that have occurred as a result. By following the money, Gordon and Webber illustrate the myriad ways Canadian-based multinational corporations, backed by the Canadian state, have developed extensive economic interests in Latin America over the last two decades at the expense of Latin American people and the environment.

Latin American communities affected by Canadian resource extraction are now organized into hundreds of opposition movements, from Mexico to Argentina, and the authors illustrate the strategies used by the Canadian state to silence this resistance and advance corporate interests.

“This careful and comprehensive analysis of Canada’s economic policies and political interference in Latin America demonstrates in brutal detail the predatory and destructive role of a secondary imperialist power operating within the overarching system of subordination of the Global South to the demands of northern wealth and power. It also reveals clearly the responsibility of citizens of Canada and other dominant societies to join in the resistance of the victims to the shameful and sordid practices exposed graphically here.”

“A vital new resource on a subject Canadians cannot ignore. Drawing on interviews, case studies and in-depth documentary research, this book is sure to become a key tool for activists, researchers and readers seeking to understand Canada’s evolving role in Central and South America.”