The United States and the World since 9/11 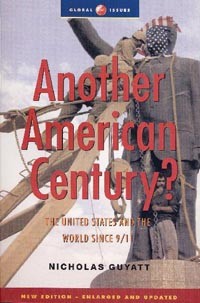 Another America Century? is a sweeping and penetrating study of the United States since the end of the Cold War. Nicholas Guyatt reveals the economic, diplomatic and military dimensions of American foreign policy and investigates what Americans say and believe about their relationship with the rest of the world. A major new chapter discusses September 11th, the wars in Afghanistan and Iraq, and the motives and ideas behind America’s “war on terror.”

“A powerful analysis [that] raises fresh, fundamental questions about an entire range of us foreign policies that have deep roots in the American economic and cultural experience.”

“A succinct, bold and penetrating critique of the triumphalist ideology which insists on American domination.”

— Howard Zinn, author of A People’s History of the United States