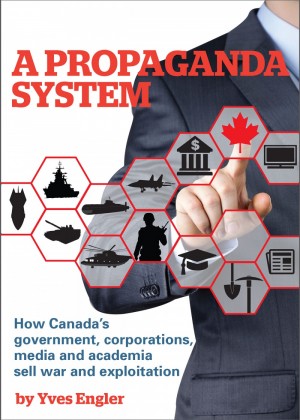 The latest book from renowned author Yves Engler reveals why most Canadians believe their country is a force for good in the world, despite a long history of supporting empire, racism and exploitation.

In A Propaganda System, Engler details the vast sums Global Affairs Canada, Veterans Affairs and the Department of National Defence spend on promoting a one-sided version of Canada’s foreign policy, which ignores the unsavoury history.

Engler traces the history of the Canadian government’s information control during wartime and peacetime, which includes outright censorship and extreme media bias on topics such as Haiti, Palestine and the mining industry. In addition, Engler details how the corporate elite advance their agenda by funding university programs and think tanks.

“Engler provides a powerful argument to support his thesis that the Canadian military fields the largest PR apparatus in the nation. This fact runs in stark contrast to Canadians’ popular notion that we are a peace-loving country.”

“Once again, Yves Engler wades into the murky waters of Canada’s foreign policy, courageously going into the depths the mainstream media avoid.”