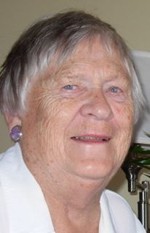 Marion Douglas Kerans, herself an activist, lives in Ottawa. She is the author of Muriel Duckworth: A Very Active Pacifist (Fernwood 1996).