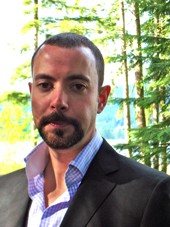 Kouri Keenan is a Ph.D. student in the School of Criminology at Simon Fraser University.