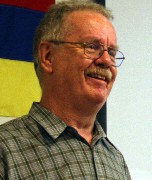 Ian Angus is one of the world’s best-known ecosocialist activists. He edits the online journal Climate and Capitalism, which has been described as “the most reliable single source of information and strategic insights for climate justice.” Ian is also an editor of Socialist Voice, director of ReadingfromtheLeft.com and a founding member of the Ecosocialist International Network.